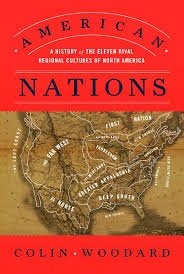 This summer I read American Nations by Colin Woodard. Its a snapshot of how early European migration has shaped the way people in different parts of the US view government. For example, people that migrated from the borderlands, a region between Scotland and Ireland, had warred with one another for centuries. These clan wars were conducted without the aid of government intervention and resulted in a borderland culture that was self governed. When the borderland people arrived to the US they were one of the first groups to push west away from organized government. In fact, the other colonies noting their individualistic and warring ways called upon them to war with different Native American tribes in order to clear the path for more colonial settlements. As payment for their services the other colonies awarded the borderland people land titles further west with limited government access.

Today, we may see remnants of this culture as different political parties work to limit government influence. In contrast, the book also highlights how some migration patterns have crafted political ideologies that call for more government participation in people’s lives. As the presidential election season comes to a close this book has been on my mind for there still may be unseen political ripples from those first waves of European migration.

If you are short on time, this Washington Post article offers a good summary of American Nations.